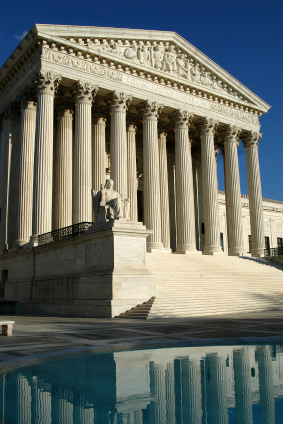 Only a handful of employment cases make it all the way to the Supreme Court’s august chambers at One First Street.  That’s largely because the Court has discretion whether or not to review cases decided by lower courts of appeals.  Thousands of unhappy litigants file petitions for writ of certiorari every year, asking for review from the highest court in the land.  Almost all are turned away.

Tomorrow, the Court will consider whether to accept an appeal by Jonathan Zang and Jackie Lawson in a case that has significant implications for the Sarbanes-Oxley whistleblower protection provision, 18 U.S.C. § 1514A.  Section 1514A, which was passed as a response to the Enron and other financial scandals of the early 2000s, prohibits public companies, as well as “any other officer, employee, contractor, subcontractor, or agent of such company,” from retaliating against “an employee” for protected activity.  The issue in Zang and Lawson’s case is whether Section 1514A protects employees of privately-held companies, if those companies are working as contractors for public companies.

The First Circuit decided that Zang and Lawson, because of their status as employees of private companies, did not have claims under Section 1514A.  Lawson v. FMR LLC, 670 F.3d 61, 62-63 (1st Cir. 2012).  Soon after, in Spinner v. David Landau & Associates, LLC,  the Administrative Review Board – which hears appeals from Sarbanes-Oxley whistleblower claims resolved by the Department of Labor – disagreed with the First Circuit, deciding that Congress intended Section 1514A to protect employees of private contractors of public companies, such as Zang and Lawson.

Now, the Supreme Court must decide whether to review Zang and Lawson’s case and resolve the split between the First Circuit and the Administrative Review Board.  In their petition for certiorari (hat tip to SCOTUSblog), Zang and Lawson say it should take the case, because the First Circuit’s decision will lead to forum shopping and fewer protections for the whistleblowing conduct that Sarbanes-Oxley was intended to protect, particularly in the mutual fund industry.  The Fidelity investment advisory companies, meanwhile, argue that the First Circuit got it right, and that the Administrative Review Board’s decision alone is not an important enough conflict to justify review.

The Court, as it sometimes does when confronted with petitions that raise an issue of interest to the U.S. government, also asked the Solicitor General to chime in.  The response was a mixed bag for the litigants.  The government agrees with Zang and Lawson that the First Circuit got it wrong, but agrees with Fidelity that this is not the time to finally resolve the issue.

If the Supreme Court decides not to take the case, we won’t know whether it did so because it agreed with the First Circuit, or because it agreed with Fidelity and the U.S. government that review would be premature.  The Court doesn’t issue the reasons for its denials of petitions of certiorari, although sometimes the Justices who would have taken the case publish dissenting opinions explaining their views.